The Government of Travancore in 1948 appointed a committee to formulate proposals for starting a Medical College at Trivandrum. The Committee submitted its report and the scheme was sanctioned in October 1948. Dr. C.O. Karunakaran was appointed Special Officer for the implementation of the scheme.

The College Campus has 139 acres (0.56 km2) of picturesque land with a number of hillocks surrounded by evergreen coconut groves and paddy fields, facing the sea which lies at a distance of three kilometres, and is located on the North – West border of the Trivandrum city. The College, is linked with the different sections of the city by bus routes, is very near the national highway NH 47 and the nearest railway station is just few kilometres from the college. The topographical layout and the architectural designs were prepared by Mr. J.A. Ritchie from Bombay. The College and the hospital buildings are separated by playgrounds for football, hockey, a cricket pitch, courts for tennis, basketball, badminton and volleyball and a 400 meter track.

Every year, about 45000 articles involved in 20000 cases are subjected to chemical examination and certificates are issued to Judiciary / Medical Officers / Police Officers / Excise Officers etc. A special drive programme is organised every year during festival seasons (Onam and Christmas) to check the adulteration of liquor samples with out delay. All the three offices used to work around the clock in the festival seasons. The results are released within hours of receipts of samples. This is just to prevent the occurrence of liquor tragedy in the State during festival occasions.

Freshly recruited Excise Officers / Excise Staff are given training in Laboratories regarding proper sampling of liquor under Abkari Act. Forensic Medicine Post Graduate Students are given training on various aspects of toxicological analysis. The Officers of this Department take classes on 'Forensic toxicology', Chemico Legal Examination Rules, Narcotic substances and Drug abuse for Police Officers and Excise Officers including I.P.S. Probationers at Police Training College, Thiruvananthapuram. Different batches of Final Year M.B.B.S. Students, Nursing Students and Pharmacy Students are given training at these Laboratories. The officers of these Laboratories participates in various exhibitions on drug abuse and psychotropic substance abuse, conducted by various agencies with Government permission. The different types of drugs were exhibited and people were given awareness on impact of drug abuse on society and country.

The institution has been upgraded to the status of All India Institute of Medical Sciences due to its unique achievements and as an important tertiary care-provider to the southern parts of India. Government Medical College, Thiruvananthapuram has been one among the two breakthrough colleges and has found a place among the top 25 colleges in the country; currently ranked 21 in the India Today India Today survey. The college and hospital has been consistently able to maintain its high quality standards despite the enormous number of patient admissions and low-cost treatment facilities. Expertise of the faculty and able administration with aids from the Central and State governments have helped maintain this status. Though academically well acknowledged it has been lagging behind in the research field perhaps due to the lack of awareness and increased importance given to clinical sector.

SAT mix which was devised by the doctors and nutritionists of SAT hospital is used throughout India for the management of childhood malnutrition. It is a cost effective measure in reducing infant mortality rates.Trivandrum Development Chart is a scale for the assessment of child development based on 17 characters. It was devised by the Child Development Centre and is recommended for use in community developmental assessment 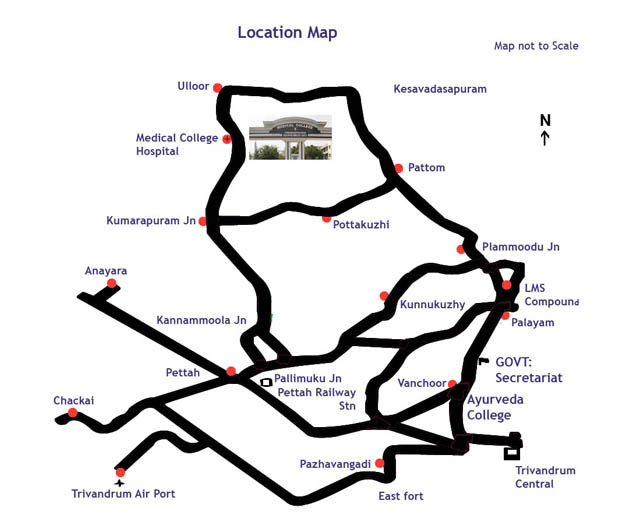